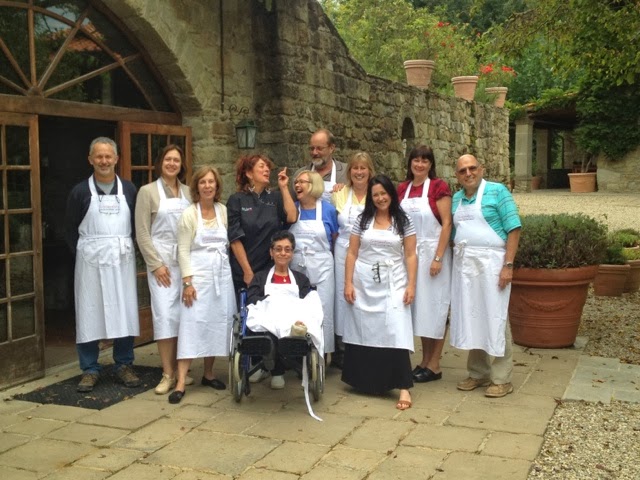 This is a bunch of my new friends - whom I definitely miss!
From left:
Raymond (Australia) - the most calm person in a group, but very efficient! He will definitely remember this as a "pigeon nightmare" - he had to debone 6 little pigeons...and when he though he finaly done all (in 2h..) - the another one was found. The funny part was that we are the pigeon ragu in 2min... it was so tasty..
Next to me - Betsy (US). Comming for a 2nd time, as an aniversary present by her "non participating" husband Joe. They were the one of the oldest couples (she 60 and him 68). But so fit, funny and full of stories, that I personally enjoyed their company most. Joe was great non-participating guest - always comming at a "Food time".. looking after wine supplies, with a smile and energy. Taking us around the medieval towns and driving a car adms he drives his motobike..
Paola - The teacher. The bundle of endless energy, filled kitchen with laugh and good emotions, payed attention and cared for every single person in a class equally. Pushed us hard, beyond our limits... we were making ~20 recipies a Day. Wonderfull person!
Nilda (US) - the poor ladie broke her leg in Florence on arrival.. still - with good attitute and her smile participated in all lessons. Paola made sure she gets recipies that do not require much movement around and we all got assignments to help Nilda.
Rosy (Australia) - as Paola said "looked like shy calm lady on an arrival day, but turned out to be a lady with a chilly peper in an ass.."..
Roberto (Australia) - the Teddy Bear of the group. The one of the most funniest guys in the world. Can't imagine the course without him.. He was a returning gyest after 8 years and it made even more special - as Paola knew him very well and made a jokes of him (like assigning him to make Tortellini..)
Sue (Australia) - Roberts wife, the absolutely lovely lady, every day discovering that "She can do it!" She was full of discoveries and good emotions during the cooking, that it kept us all awaken!
Brook (Australia) - "allow me to talk".... Imagine, that 2 days before.. over a lunch I became very popular with a phrase "Brook, go to the point".. which was then quoted quite often by everyone :)
Cecile (Canada) - very sincere, nice and kind person. In the kitchen very direct and not disturbing, unless needed. Full of joy and smile, beautifully filling up the company.
Ronaldo (US) - Nilda's husband, who took a great care of Nilda.. and a pationate cook. Eager to try and learn new things.
This was amazing group of people.. the last Day we even done a Flash Mob (!) of "Hand washing dance" at a Gangnam style...which Paola so much enjoyed. I'll post a video later!! That was something.. with everyone participating.. that was soooo funny!!
Last day was a bit easier. I got a starters - Octopus Salad and Marinated anchovies: 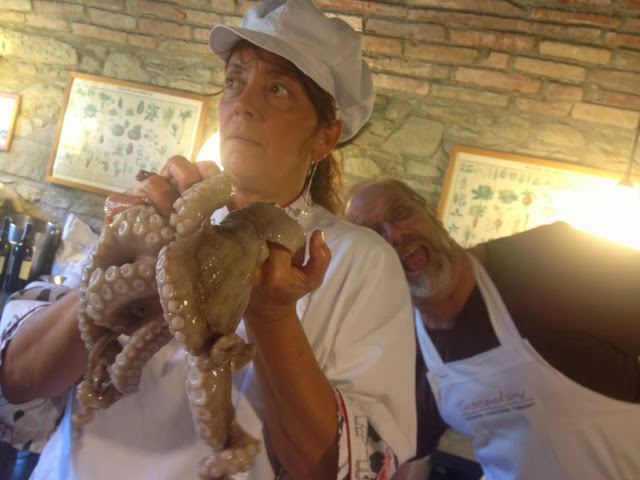 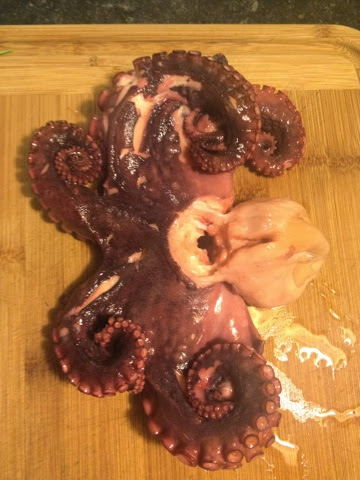 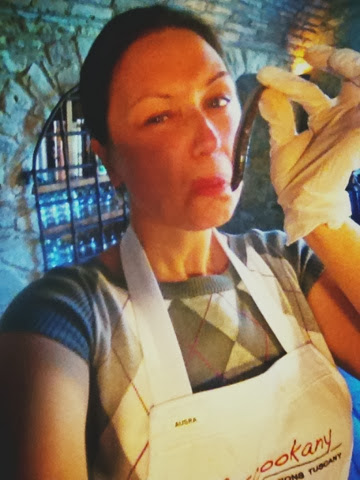 And adms true Lithuanian, who mostly eat potatoes, I got to do a Potatoe & Rosemary bread (mmmm delitious): 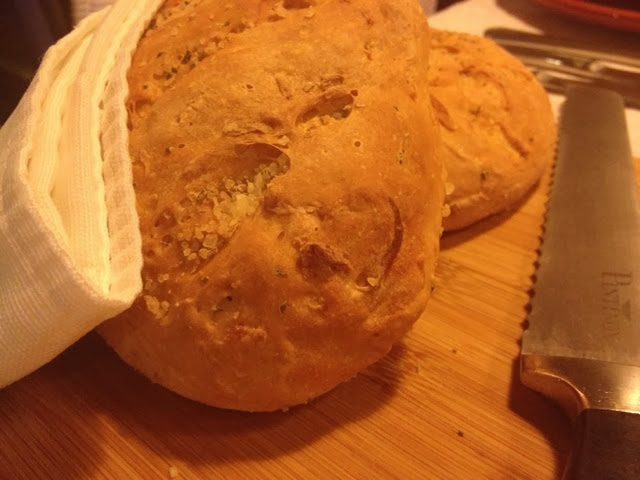 And this is Joe fire... That he was litting every night for us to sit and enjoy with last glass of wine.. 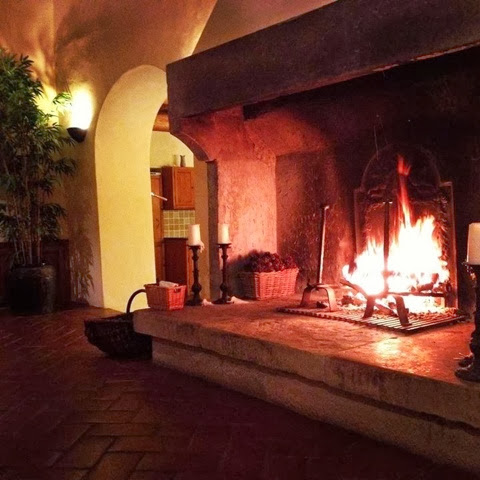 Miss you guys!!
...But!! the second part of Holdays start!

Popular posts from this blog 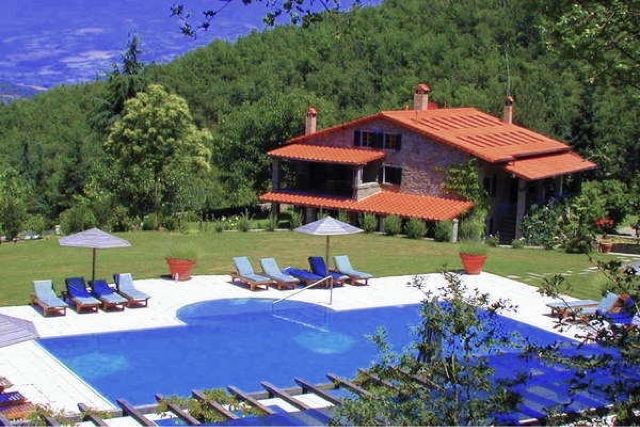 It all started a Year ago, when I have decided that my Dream vacation destination will be Bali, Indonesia. Right.. and what does it have to do with the Italy? Nothing.
One day I woke up and realised that I need something more.. I need a proper vacation (which for me is relaxing at the pool with preferably some sun) with a bit of activity.. just not to get crazy. I need an adventure ...just to properly remember the Vacation fact.. I need something else than just a nice location, with nice beach and tons of sun.

"Cooking Vacation" - this was my old dream.. which had an absolute possibility to come live. Why not to give a try?

..and here the fun begins. Where? After some research and number of hours browsing I realised that if you want to learn to Cook - you either go to France or Italy. (Just to note that selection criteria included "Sun", as a prerequisite). There are number of Spanish courses - but we don't want "Tapas" do we? We need proper Fo…
Read more 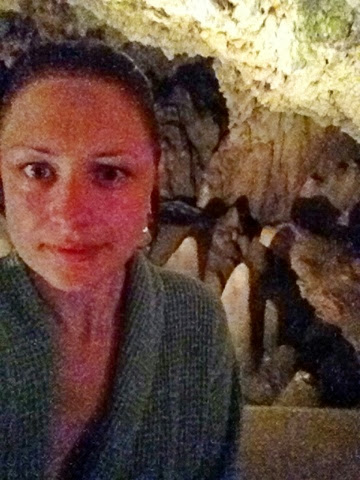 Today I had a real "vacation" - meaning spending a Day at a pool, sun-tanning and reading a book. As Tuscany is famous with it's Termal waters and natural hot Springs, I search for a place I could enjoy this. The closes and most attractive was a Grotta Giuspi SPA .. definitely the most unique Spa experience I had! You have a natural underground sauna in a Grotta (Cave).

It has 3 areas - Limbo first (warm), then you proceed to purgatory (warmer) and end up in Hell (hot) to relax, meditate and sweat out all the toxins in your body. I immediately fell asleep... and seems not the only one to do that, as woke up by someone snoring at the other end of the cave room :))

P.s picture is not mine, as it's quite hard to get anything taken...and you are not allowed phones..as they would get quite wet after an hour there..
Having in mind that I got a great Last Minute Deal - it was a good experience and a nice place to stay (even I feel 30 years to young being gere..).. But I would …
Read more